The Pocket Guide to Mischief

Do You Know a Mischief Maker?

Hopefully! After all, the greatest leaders in history were mischief makers! They were the brave women who looked at injustice and said, “We can do better.” They were the courageous men who saw something dumb and asked, “Why?”

And they were the delightful children who threw wet noodles at the neighborhood bully until he yelled, “Okay, okay, I’ll be nice!”

Yes, mischief makers are the people with the courage to point out that things like global warming and turtleneck sweaters are bad. (I’m only kidding about one of those.) And they also pulled off some of the greatest practical jokes of all time. Their achievements include the Boston Tea Party, the “War of the Worlds” radio broadcast of 1938, and the Cheese Whiz Disaster of 2008. 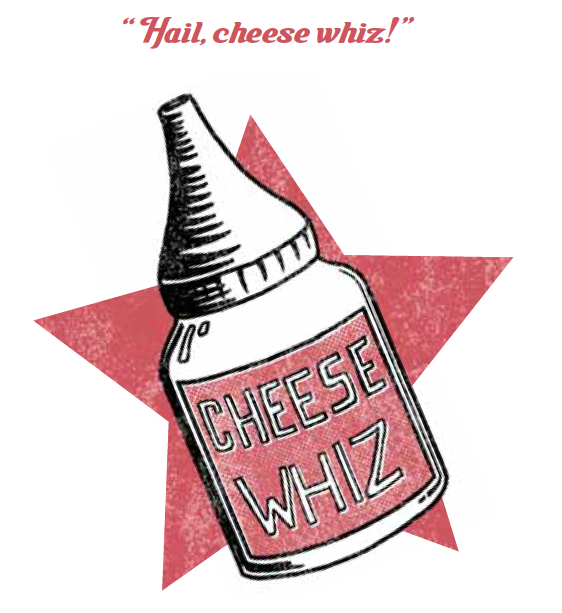 Ooh, now watch The Pocket Guide to Mischief videos! There’s one below, and another two further down.

“What kid could resist this title? Sized for handy stashing in the inside pocket of a jacket, 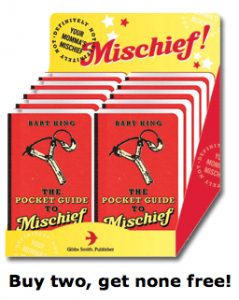 this primer for merry-prankster wannabes has good safety information. After this, King takes off the brakes. From the smorgasbord of tricks: instead of TP’ing someone’s house at night, sprinkle the lawn with instant potato flakes (the dew will puff them up). And a tip: a pencil or pen clamped between the teeth effectively disguises one’s voice.

“Kids will also go for the Oxford Dictionary insults—e.g., ‘cockalorum’—recommended as replacements for ‘cuss words’; the detailed guide to shooting rubber bands; and the many scatological jokes.” —Publishers Weekly

“This book is a great, if quirky, way to get kids excited about history, elevate their vocabulary, and get them reading. And it’s in a package you won’t have to shove down their throats. Just don’t be surprised if you have to endure the occasional whoopie cushion at dinner time. It’s worth it. Rating: Four-and-a-Half out of Five Stars.” —Danielle Wood, Education.com 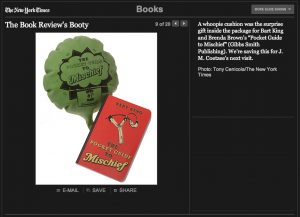 “The Pocket Guide to Mischief” is in the New York Times!

“The author’s name is Bart King, but it might just as well be Bart Simpson. Because thisbook is just the type of tome Bart S. would keep under his pillow. It contains instructions about prank-pulling, slights and jibes one can inflict on those people readers put under the category of ‘Nemesis.’ Example: What to say to a Nemesis who asks you how he would look in a certain article of clothing. Answer: ‘Lonely.’

King suggests some classic mischief, including peeling the labels off the cans in your Nemesis’ kitchen. Of course, all the pranks in this book would be very wrong to actually execute. *wink*” —Florida Times-Union

“The Pocket Guide to Mischief [has] a wealth of nearly-naughty ideas for playing pranks on your friends…. (My sons read this book cover to cover.)” —Sue Corbett, Miami Herald 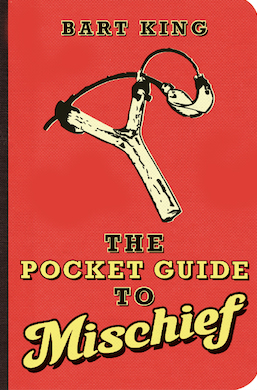